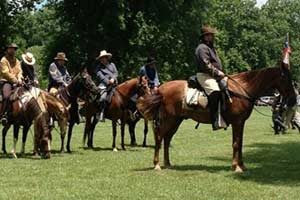 “Citizen Meets Soldier” is a living history of 1863 in Carroll County, Maryland. Join us at Union Mills to commemorate the events of the hot summer of 1863, in the wake of the Second Invasion of the North. Walk in the footsteps of the citizens of Carroll County, Maryland, who were divided in their loyalties, and the Union and Confederate soldiers who camped along Big Pipe Creek at Union Mills in the days prior to Gettysburg.

Union Mills’ Civil War Encampment will celebrate and commemorate the excitement of the Civil War in Carroll County, Maryland. The Union Mills Homestead Foundation, Inc. is pleased to host this event, recreating the period that culminated in the pivotal Battle of Gettysburg.

In the days surrounding Lee’s Second Invasion of the North, small towns in Carroll County — including Union Mills — saw the movement of both Union and Confederate Armies, supply wagons, injured soldiers, and an important skirmish occurred in nearby Westminster. There, Union Cavalry charged headfirst into Confederate Cavalry under the command of Maj. Gen. J.E.B. Stuart. But for a few hours, a battle may well have occurred at Union Mills, as it lay dead center in the Union Army’s defensive line along Big Pipe Creek and Union Mills served as the site of overnight encampments by both Stuart’s Confederate Cavalry and Sykes’ Fifth Corps of the Union Army. Stuart’s Cavalry pulled out of Union Mills just hours before the Union Army arrived! Living history portrayals, encampments, and historic displays interpreting this period will take place on the scenic and spacious grounds of the Union Mills Homestead.